We are still accepting enrollment for the fall 2022/23 season! View our fall schedule, and register today! 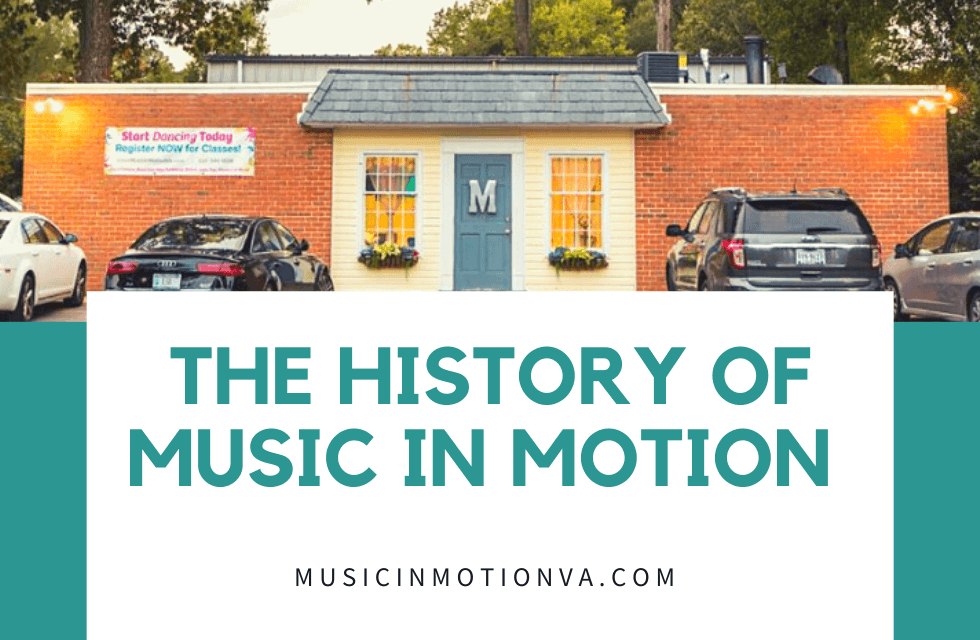 Did you know that Music In Motion has a long history?? Not only has the studio been in business since 1983 but the building itself has an even longer history of housing dance and the arts. We hope you find this quick overview of our history interesting, we know we do! As you bring your child to our studio, know that there is a long line of dancers who have started their education within these walls. Pretty cool right?!

The original cinder block building was completed and Janice Ferguson began to teach dance classes as Kings Grant Dance Academy! Janice Ferguson was a Rockette in NYC right out of high school in 1944 and 1945.  She purchased the land on N. Lynnhaven Rd in 1966 and built 2 studios, a dressing room, lobby and office. She is 94 years old today and currently living in Georgia.

In the mid-1970’s, the large warehouse space in the back room was added to the space. It was operated as a separate business. The space housed a gymnastics studio for many years, including Gymstrada, and Eleanore Unger's Scottish Dance Theater.

Darlene Davenport, Ms. Lauren's mother bought the business in 1985 after teaching at the school (then called Children's Dance Theatre). She then changed the name to Music in Motion Dance Academy.  Ms. Darlene received her BA in Dance from the University of Maryland in 1975.  Danced professionally with the Maryland Dance Theater, Fusion in Miami, Robert Ivey Ballet in Charleston, SC.

The Children's Dance Theatre continued as a separate non-profit 501c3 arm of the business throughout the 80's, 90's and 2000's with current owner Ms. Lauren as a company dancer!  The pre-professional dance company participated in the Neptune Festival and performed at several special events including the grand opening ceremonies of the Naval Aviation statues at the oceanfront and was supported by the Virginia Beach and Norfolk Arts and Humanities Commissions.  Music in Motion Dance Company performed all over Virginia and North Carolina including the Pavilion Theater at the Oceanfront, the Chrysler Museum, The Roper Theater in Norfolk and The Historic Palace Theater in Cape Charles.  Adult members of the Music in Motion Dance Academy were performers with the Young Audiences of VA for 3 years and performed in schools all over the state.

June Show Recitals at this time were often at Princess Anne or Cox High Schools before finding a permanent home at the Roper Theater. Ms. Darlene continued to run the school, was the main Modern and Jazz instructor, and was the Artistic Director of the Dance Company.

Ms. Lauren returned to Virginia Beach to take over the studio in 2016. She has loved stepping into this role and continuing on the legacy! Our 2022 recital is the 55th year anniversary of the opening of a dance studio in Kings Grant in Virginia Beach!

Check out the photos below from our past!